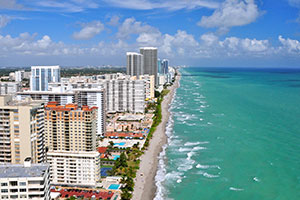 North Miami Beach is a major suburb of Miami. It is surrounded by unincorporated Miami-Dade County, Miami Gardens, Golden Glades, Ojus, and North Miami. Being so close to the Golden Glades Interchange where I-95, the Turnpike, and the Palmetto Expressway meet makes the suburb the “Crossroads of South Florida.” It is an ideal place to live and raise a family. It is also a tourist destination because of its shopping, popular beaches, and an authentic Medieval Spanish monastery, the St. Bernard de Clairvaux Church. Like any busy region, North Miami Beach experiences all types of crimes, from property offenses to violent acts. These crimes can victimize both residents and visitors. If you or a loved one were physically and emotionally harmed during a crime, do not hesitate to call our North Miami Beach crime victim lawyers at Gerson & Schwartz P.A. at (305) 371-6000.

If you are a resident of North Miami Beach, it can be comforting to know it does not have an exceptionally high crime rate. However, crime rates are hardly your focus when you or a loved one have been victimized during a violent, sexual, or property crime. If you are hurt, do not hesitate to speak with a crime victim lawyer for North Miami Beach to discuss your legal options. You may have the right to file a civil lawsuit against the offender. Or, if you were injured on a municipality or business’s property due to inadequate security, you may have a claim against the property owner.

Seeking Compensation After Being Injured During a Crime

This is a different proceeding than any criminal trial. You may file a personal injury case whether or not the prosecutor charges the offender with a crime. You may file a personal injury claim and obtain compensation whether or not the offender is found guilty. In fact, there are many situations in which an offender may not be charged or convicted, yet you could pursue compensation still. That is because civil cases have a lower burden of proof than criminal trials. A prosecutor must prove that the offender committed a crime beyond a reasonable doubt. Your North Miami Beach crime victim attorney only needs to prove by a preponderance of the evidence that the offender caused your injuries.

At Gerson and Schwartz P.A., we will utilize a variety of evidence to prove the offender caused your injuries, including:

If we are able to establish that it is more likely than not that the perpetrator caused you harm, then we will ask the jury to award you compensation for your:

Our attorneys at Gerson & Schwartz P.A. have over 50 years of experience, and throughout that time, have been dedicated to helping crime victims obtain the resources they need to move forward in life. Philip M. Gerson is the chair of the board of directors of the National Center for Victims of Crime, and he was the founding board president of the National Crime Victim Bar Association.

Our crime victim attorneys for North Miami Beach want to help you. Give us a call at (877) 475-2905 to discuss how we can assist you and your family.